Are you using your words for good?

“Sticks and stones may break my bones, but words will never hurt me.” 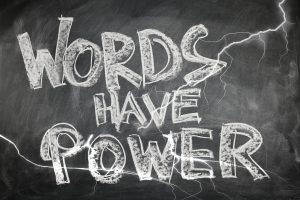 When we were children, we attempted to deflect the words of bullies (or just other insecure children), by reciting this chant. The message was, of course, that we could tolerate name-calling or verbal taunts, as long as there was no physical violence.

In truth, though, the words did hurt us. We probably all have memories of childhood hecklers, who usually relayed their stinging words in a sing-songy or mocking tone. For myself, my family name was very difficult to spell and even harder to pronounce. It was the target of many rude versions that included words that did, indeed, hurt me.

As we grew up and matured in our interactions with others, through experiences and formal education we learned that words do hurt almost as much as those sticks and stones.

At some point, it apparently became acceptable for grown, seemingly mature adults to use negative words without fear of reprimand or repercussion. The bullies on the playground have been allowed out into the world, to taunt those who are not like them or who make them more insecure. There is no teacher or principal around to stop them or teach them that their words are hurtful and wrong.

How do we respond? How do we change the tone of the conversation? How do we start using our words for good?

Most of the hurtful words today are being transmitted via electronic communications. We are tweeting and texting and posting on social media, words that we might not ever dare say in person. Virtual taunts are also safe as there is no face to reflect the damage done, no body language of shock and distress, but only words on a screen.

So why is it suddenly okay to hurt someone with words? The schoolyard bullies have become the cyber bullies. They hide behind the technology. Worse, they may have lost touch completely with the notion that there are real human beings reading the words they’ve posted.

Albert Einstein once wrote,”I believe that the abominable deterioration of ethical standards stems primarily from the mechanization and depersonalization of our lives.” We are apparently at that point where we have depersonalized our lives and our words.

Using our words for good actually takes little time and generates amazing results. Perhaps we can start a ripple effect.

Choose words for good today, with everyone you meet. Note the relief on their faces and maybe even a change in their attitude. Post words for good on social media.

Soon the negative words will be outnumbered and we will (hopefully) understand once again that words, whether in the virtual world or the real word, truly can hurt almost as much as those sticks and stones.

Have a question about workplace communications?

Looking forward to hearing from you!

Communicating across the generations Is it a waste of time?