Of the many words that have been misused over the course of time, the word “obsessed” is being abused consistently now. Its meaning has drastically changed in everyday conversation recently, just as the meanings of so many other words continue to change.

For example, if you watch home renovation shows, listen carefully and you will hear people talking about being obsessed with a color or a room that has just been redecorated. They might say they are obsessed with an object even, such as a piece of furniture.

What they really mean is that they are pleased with the way things turned out and they probably plan to spend a good deal of time in that room, or looking at that color, or enjoying that furniture. What they do NOT mean (we hope) is that they are preoccupied in an intrusive or troubling manner, which is actually what the word means. 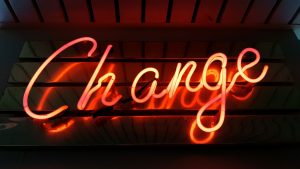 Words do change their meaning over time. We’ve discussed that before here. Some of that change can be good, or at least not so bad, but some of it means that words completely lose their original intent. Take that word “obsessed,” for example. In the original Middle English, it meant haunted or possessed, as by an evil spirit. The Latin root means to sit opposite, or to be besieged. Pretty sure that’s not what people mean by the word today.

Of course, instead of saying we were obsessed with something, we used to say it was awesome. That word has also changed considerably from its original meaning. In the late 16th century, the word meant “filled with awe” but the word “awe” referred to feelings of severe dread or fear, not admiration. So, for a while, when someone referred to something as awesome, it meant they were in terror because of it!

Have you seen or heard words that have a drastically different meaning now? Do you notice a pattern in new words or a new use for old words? Are you excited by change? Are you contributing to that change?

Language is a living being, even when certain word usage makes me cringe. Guess I shouldn’t be so obsessed with their real meaning.

Words have power. Are your words working for you?

Yeah … so …. The reconnecting challenge